The International Court of Justice Case on Genocide in Myanmar

In November 2019, The Gambia filed a case with the International Court of Justice alleging that Myanmar military had violated the Genocide Convention for years in its treatment of the Muslim minority group, the Rohingya. A United Nations fact-finding mission had found similar patterns of abuse, documenting widespread violations of human rights in Myanmar against minority groups, including crimes against humanity, genocide, and war crimes. The International Court of Justice handed down provisional orders to protect the Rohingya in January 2020. Now, with the backing of all 57 members of the Organization of Islamic Cooperation, The Gambia’s case against Myanmar will proceed. Please join the Human Rights Program for a conversation with Philippe Sands, Arsalan Suleman, and Yee Htun, to discuss the case and the situation in Myanmar. Tyler Giannini, HRP Co-Director and Clinical Professor of Law, will moderate.

Lunch will be served. Co-sponsored by the Program on Law and Society in the Muslim World, the Harvard Human Rights Journal, the Armed Conflict and Civilian Protection Initiative, the Program on International Law and Armed Conflict, and the Asia Center at Harvard University.

Philippe Sands QC is the Samuel LLM ’55, SJD ’59 and Judith Pisar Visiting Professor of Law at Harvard Law School for Spring 2020. He is also Professor of Law at University College London and a barrister at Matrix Chambers, of which he was a co-founder in 1999. He practices as Counsel before many international courts, including the International Court of Justice and the International Criminal Court. He sits as arbitrator in ICSID and other investor state disputes, and on the Court of Arbitration for Sports.

He is the author of fourteen academic books, including Principles of International Environmental Law (4th edition, 2018); of Lawless World (2005) and Torture Team (2008); and contributes to the New York Review of Books, Vanity Fair, the Financial Times and The Guardian.

Arsalan is the U.S. Department of State’s former Acting Special Envoy to the Organization of Islamic Cooperation (OIC), the world’s second largest international organization after the United Nations. He engaged with the OIC and its member states on bilateral and multilateral foreign policy issues, including via participation in Heads-of-State Summits and Ministerial Level Meetings. Arsalan launched the first-ever U.S.-OIC annual bilateral consultations, institutionalizing the U.S.-OIC relationship via an annual dialogue process. He engaged with the OIC, OIC member countries, and relevant civil society on a broad range of foreign policy issues, establishing partnerships in areas of mutual interest such as human rights, countering violent extremism, health, education, entrepreneurship, and science and technology.

Yee Htun is a Clinical Instructor and Lecturer on Law at the International Human Rights Clinic. She works extensively on gender justice issues and has been involved with law reform efforts to advance human rights in Myanmar. Yee has more than ten years of international advocacy experience. Her reports on behalf of human rights defenders, refugees, internally displaced people and migrant communities have been submitted to the United Nations and its Special Rapporteurs. 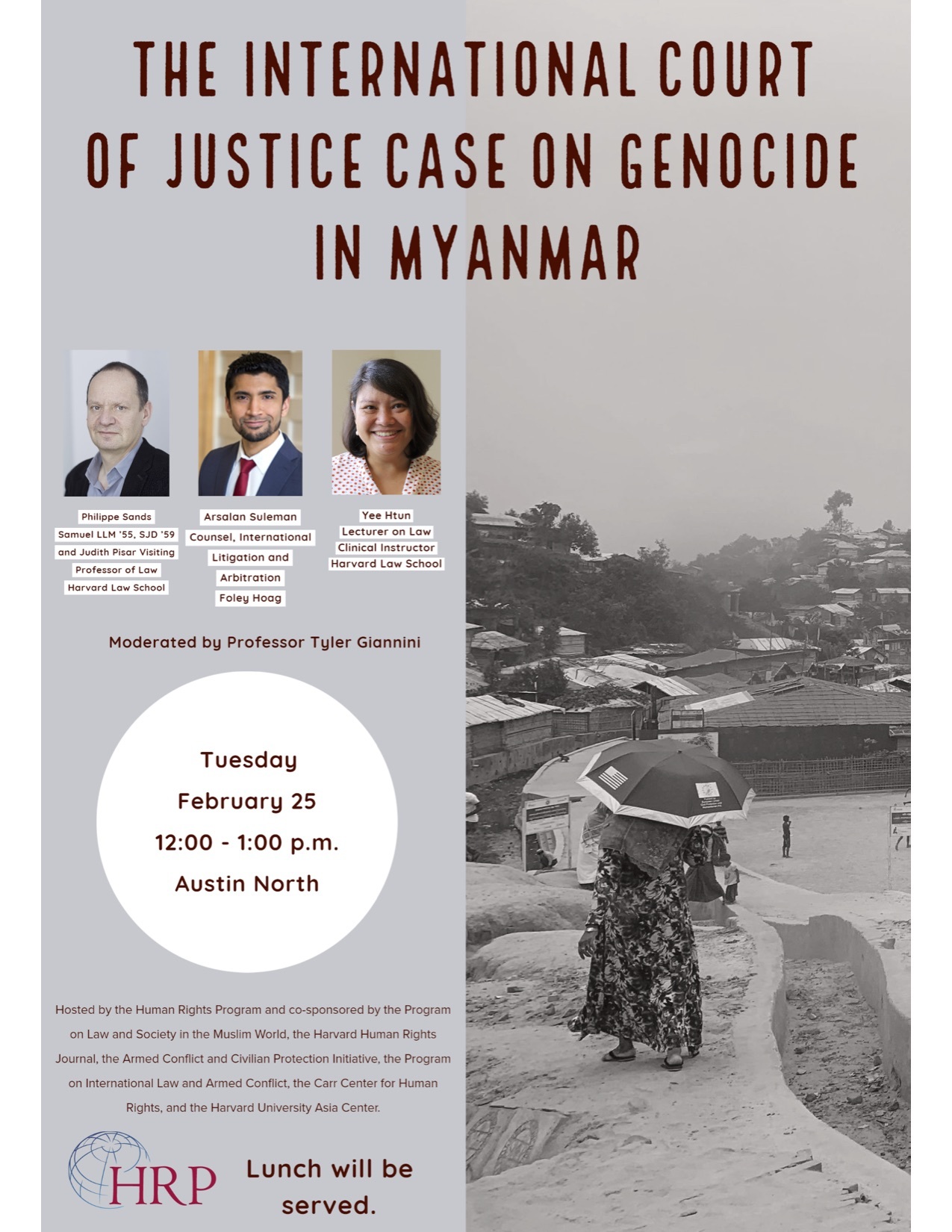 The Temporary Recluse: The Discourse of Not Working in Early Medieval Chinese Poetry