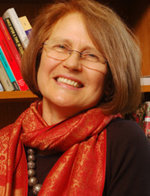 Carma Hinton was born in Beijing and lived there until she was twenty-one. Chinese is her first language and culture. Together with Richard Gordon, Hinton has directed thirteen documentary films about China, including The Gate of Heavenly Peace, Small Happiness, First Moon, All Under Heaven, Abode of Illusion, and Morning Sun.

Hinton is a scholar as well as a filmmaker. She has a Ph.D. in Art History from Harvard University and has held teaching positions at Swarthmore, Wellesley, Northeastern, and MIT. In addition, she has lectured widely on Chinese culture, history, and film at educational institutions both in the United States and around the world.

Her films have been shown in numerous film festivals worldwide, including New York, Berlin, Hong Kong, Vancouver, and San Francisco. They have also been screened at the Film Forum in New York, the Museum of Fine Arts in Boston, and the Smithsonian Institution in Washington DC, among others, and broadcast on television stations around the world, including PBS, the BBC, and ARTE. Awards received include two George Foster Peabody Awards, the American Historical Association's John E. O'Connor Film Award, the International Critics Prize and the Best Social and Political Documentary at the Banff Television Festival, and nominations for Best Documentary Feature by the National Film Board of Canada, the ABCNEWS VideoSource and Pare Lorentz Awards by the International Documentary Association, and a National News & Documentary Emmy Award.

Smallpox Against Itself: Exploring the History of Inoculation in Tibet

What made South Korea’s COVID-19 response so successful?