Lineages Embedded in Temple Networks explores the key role played by elite Daoists in social and cultural life in Ming China, notably by mediating between local networks—biological lineages, territorial communities, temples, and festivals—and the state. They did this through their organization in clerical lineages—their own empire-wide networks for channeling knowledge, patronage, and resources—and by controlling central temples that were nodes of local social structures.

In this book, the only comprehensive social history of local Daoism during the Ming largely based on literary sources and fieldwork, Richard G. Wang delineates the interface between local organizations (such as lineages and temple networks) and central state institutions. The first part provides the framework for viewing Daoism as a social institution in regard to both its religious lineages and its service to the state in the bureaucratic apparatus to implement state orthodoxy. The second part follows four cases to reveal the connections between clerical lineages and local networks. Wang illustrates how Daoism claimed a universal ideology and civilizing force that mediated between local organizations and central state institutions, which in turn brought meaning and legitimacy to both local society and the state. 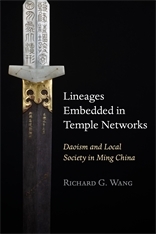