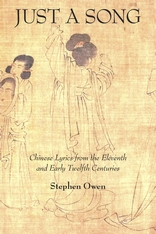 The Stanislas Julien Prize recognizes outstanding Western-language scholarship in the field of Asian humanities. It has been awarded annually since 1875 by the Académie des Inscriptions et Belles-Lettres, one of France's most distinguished academies. The prize is named after the renowned French Sinologist, Stanislas Julien (1797–1873).

Just a Song examines “Song Lyric” or ci, one of the most loved forms of Chinese poetry. From the early eleventh century through the first quarter of the twelfth century, song lyric evolved from an impromptu contribution in a performance practice to a full literary genre, in which the text might be read more often than performed. Young women singers, either indentured or private entrepreneurs, were at the heart of song practice throughout the period; the authors of the lyrics were notionally mostly male. A strange gender dynamic arose, in which men often wrote in the voice of a woman and her imagined feelings, then appropriated that sensibility for themselves.

As an essential part of becoming literature, a history was constructed for the new genre. At the same time the genre claimed a new set of aesthetic values to radically distinguish it from older “Classical Poetry,” shi. In a world that was either pragmatic or moralizing (or both), song lyric was a discourse of sensibility, which literally gave a beautiful voice to everything that seemed increasingly to be disappearing in the new Song dynasty world of righteousness and public advancement.

This is the fourth occasion that a Harvard University Asia Center title has received the prize. Previous winners include Terry Kleeman for Celestial Masters: History and Ritual in Early Daoist Communities (2017), Endymion Wilkinson for Chinese History: A New Manual (2014), and James Robson for Power of Place: The Religious Landscape of the Southern Sacred Peak (Nanyue 南嶽) in Medieval China (2010).